Meet Bailey and Oliver. Bailey, the redhead, and Oliver, the cockapoo. Which one is sweet…and which one is feisty? Could it be that they are both….both? 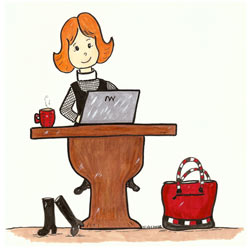 Bailey is at a crossroads in her life, living alone again, but with Oliver. She is a hopeless romantic, searching for answers, and always looking for signs…a “Meg Ryan movie just waiting to happen”. Being a major music lover, Bailey is convinced that God talks to her through music…or at least through satellite radio. Bailey spends a lot of her time on the computer, falls asleep on the couch way too much, is constantly challenged by Oliver, and MUST have her mocha everyday. As she tries to move on from her past and into that great unknown….the future, she is content for now simply “embracing her Baileyness”. 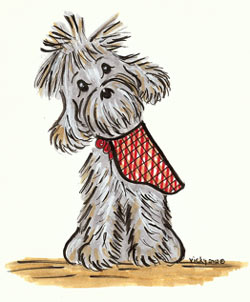 Oliver is a cockapoo that clearly has no intention of letting life get too easy for Bailey. In his mind, he is the one in charge, Baileyʼs “low tech security system”, and can leap tall buildings….well, that might be a stretch, but he can jump over the couch! In reality, he is afraid of his own shadow. Oliver is a bouncing ball of energy, but in order to cohabitate with Bailey, he has discovered his “inner cat” and ﬁnds sleeping on the back of the couch to be quite rewarding. Bailey and Oliver have survived “the puppy years”…it was close a few times, but they made it. It only took a few therapy sessions. When Bailey said she wanted a therapy dog…she didnʼt mean she wanted one that would send her to therapy!

Keep up with Sweet & Feisty!