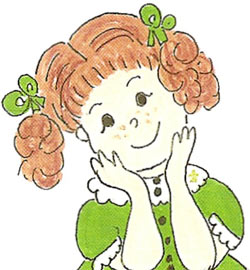 As little girl with red hair, I really did think I was “The Little Red- Haired Girl” in Peanuts….but, I also wanted to marry Snoopy. I loved to draw and practiced drawing Snoopy all the time, and later realized that Charles Schulz was who I wanted to grow up to be, well, the female version. In the 6th grade I won first place in an ecology poster contest…I drew all the Peanuts characters and titled my poster “It’s Your World Charlie Brown!” I won $15 dollars! Years and years later when I started learning about copyrights….it dawned on me that I might have infringed on Charles Schulz’s copyright by accepting the $15. I hoped that one day I would get to meet Charles Schulz and I would personally repay him the $15…..but, unfortunately, Mr. Schulz passed away on my birthday, before I got the chance. A couple of wonderful friends who knew my dream tried to make me feel better by saying that “He passed the torch to you!” All I could say was that if I was talented enough to have just one ember from that flame, then I would be happy.

Like Charles Schulz, I am a huge dog lover….and I got a little black cocker spaniel named Freddie, being a female, we ended up calling her Freddie Girl. I started drawing her and decided to start my own greeting card Company….ArtSmart Cards. When my father passed away, we found a little box in which he kept things that were special to him. There was a Father’s Day card that I made him when I was around five or six years old. I flipped the card over and on the back, I had placed my logo….Smart Cards. Some dreams just seem to stick with you.

After this I decided that it was time to try my hand at doing comic strips…if I was indeed serious in wanting to follow in Mr. Schulz’s footsteps. I did several strips of “It’s Freddie Girl”, and found out that the local chapter of The Southeast Chapter of the National Cartoonist Society was having a workshop one Saturday. I went, showed them my work and they invited me to start attending their meetings. I am now creating a new comic strip based on my life now….named “Sweet & Feisty”.

Although I am much, much older now from those days of wanting to marry Snoopy….I really am, miraculously, still “a little red-haired girl”….and even when the red fades, I will still be a little red-haired girl at heart. I think now, instead of trying to follow in someone else’s footsteps, I am just going to “Embrace My Vickyness”….and see where that takes me!